The Necessity Of Egypt.

Genesis 37:18-20; 28They spotted him off in the distance. By the time he got to them they had cooked up a plot to kill him. The brothers were saying, “Here comes that dreamer. Let’s kill him and throw him into one of these old cisterns; we can say that a vicious animal ate him up. We’ll see what his dreams amount to.”…

By that time the Midianite traders were passing by. His brothers pulled Joseph out of the cistern and sold him for twenty pieces of silver to the Ishmaelites who took Joseph with them down to Egypt. (MSG)

When we think about Egypt and Israel, half of the time all we see is the suffering of the Israelites and not the necessity of Egypt. I was laying down one morning after prayer then heard, “Egypt isn’t all bad, sometimes it’s necessary”. I opened my eyes and took my phone and started recording everything the Lord was sharing with me about the necessity of being in Egypt. I started studying Joseph. Even though I already knew the story by heart and have watched the movie several times, I felt there was fresh manna waiting to be picked up. 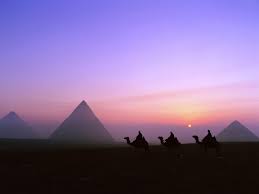 Sometimes going to Egypt isn’t a such a bad thing but a God thing. Joseph being in Egypt was part of Gods grand plan to preserving Israel when the famine came. Before the drought, we read that Joseph was favored by his father Jacob because he was Rachel’s first son, a woman he had loved dearly. (Genesis 37:3-4) He’d also had several dreams and all showed he had dominion over his brother, not in a bad way but a godly way. (Genesis 37: 5-11)

Jealousy is like a demonic fire that waits to devour Gods chosen and it always seek a soul that’s willing to carry its fire. Josephs brothers were jealous, and one day when his father sent him out to go see how his brothers and the sheep they were tending fared, they plotted to kill him but ended up selling him to slavery. (Genesis 37:18-20)

One thing led to another and he landed in the house of Potiphar, one of pharaoh’s official to manage his household affairs. In the events that followed and in face of adversity, he remained humble, faithful and he clung to his God. He endured the sufferings of his captivity with grace. He sought the Lord.

Let me step back from Joseph for a bit and focus on you and me. When was the last time you found yourself between a rock and a hard place? How did you handle it? Did you cave in to the pressure of your circumstances or did you like Joseph remain connected to God even after you’d prayed for God to save you from something but He didn’t bring you out the way you thought He should have? I have. I went through a difficult time many years ago. I prayed and asked God to end it and when things didn’t change, I walked away from the Lord. Unlike Joseph, my love for God was conditional. I know I’m not the only one who’s been there and done that but how many are still harboring the hurts of Egypt? How many are still bearing the scars of Egypt? My friend, give it to God, He healed me and I know He can heal you too.

Like Joseph you might have been accused about things you didn’t do yet everyone or most people believed even those who should have known better and you got condemned by the crowd.

Like Joseph you might have been forgotten by those who swore to remember you and you were left in the dungeon of condemnation.

My friend, like Joseph hold on. Stay strong. Be faithful. Continue seeing the goodness of God. Seek the Lord. Endure your situation and trust God. God can use anything because;

Like Joseph you will gain favor in the eyes of pharaoh.

Like Joseph you will receive a promotion you didn’t even know existed.

Gods master plan doesn’t have to make sense for you to say yes to His plan or endure the trials of your seasons. I didn’t know what could have happened had I trusted God through my trial season. God is faithful though because He redeemed the time for me and restored all the things that had been taken from me.

I don’t know your situation, I don’t know what you’re going through. I don’t know what you’ve been through. What I can tell you is nothing is wasted. God can use your harshest, most painful and uncomfortable circumstances for your good. You already know He makes all things new Revelation 21:5. He takes what the enemy meant for harm and turns it for your good Genesis 50:20. He is for you Romans 8:31. He has a plan for good and not for evil Jeremiah 29:11. Your suffering is not His doing but the seasons of captivity can be used as your preparation seasons. You can turn it to your advantage. If you will stay the course, if you will hang in there, if you will seek Him, He will deliver you. You never know, maybe you are called to be a Joseph to a generation that is desperately in need. Joseph wasn’t an Egyptian yet God promoted him to second in command in Egypt because he remained steadfast and faithful in the face of adversity.

Hope this blesses you, encourages you and gives you hope. Egypt isn’t always all bad. As always, if you need prayers, please let me know. I’ll be happy to pray for you.

5 thoughts on “The Necessity Of Egypt.”